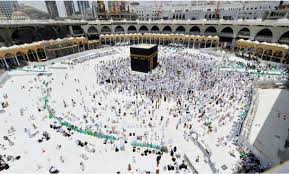 The temporary mataf has been completely dismantled and removed, providing much more space for worshippers to perform the congregational prayers near the Kaaba on Friday.
“A total of 10,489 pieces of the mataf and connecting bridges were removed within 35 days,” Wael Al-Halabi, a member of the technical committee for projects of the Two Holy Mosques, was quoted as saying by local media.
More than 580 individuals from the group participated in the removal of the bridge in addition to 80 engineers from the technical committee, he said.
He appreciated the efforts of the committee’s employees in removing the temporary mataf quickly, and also thanked the Ministry of Finance, Special Command Force of the Grand Mosque,
Presidency of the Two Holy Mosques, Makkah Civil Defense and the Binladen Group.
Al-Halabi said work was stopped during Fridays so as not to disturb worshippers and provide more space. He said that work hours exceeded 200,000 with no registered injuries, “thanks to God and those committed to implementing safety requirements and professional health.”
He said the Special Command Force of the Grand Mosque exerted remarkable efforts in controlling overcrowding in the mataf. The General Presidency provided awareness services to worshipers and the Civil Defense kept a watch on the weather that might affect the workflow. It also kept an emergency plan ready for rain or strong winds.
Al-Halabi said the removal of the temporary bridge was done according to a scheduled plan by the Binladin Group over eight stages.
“It was also amended according to the workflow in order to provide the utmost comfort and more space for the visitors to the Grand Mosque.”