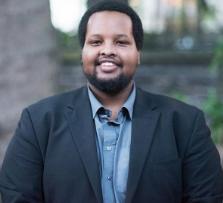 Muslim Council of Britain is saddened to learn of the passing of Bashir Osman, President of its national affiliate, the Federation of Student of Islamic Societies (FOSIS). Bashir was also a member of the MCB’s National Council. Bashir died in a drowning accident in Switzerland. Inna lillahi wa inna ilayhi raji’un: ‘Surely we belong to God and to Him shall we return’.
Bashir Osman was much loved in the Muslim community, and amongst British Muslim students in particular. He was known for his compassion, leadership and commitment to the community.
Mourning his loss, Dr Shuja Shafi, Secretary General of the Muslim Council of Britain said: “I had the honour and pleasure of meeting Bashir Osman soon after he was elected FOSIS president. I saw in Bashir a man of great humility but also one who was anxious to get things done for the betterment of people around him. Though his life has been cut short, he has achieved much during his brief tenure for British Muslim students and the community. He will be remembered as a role model for us all. I offer my condolences to Bashir’s family, his friends and his many colleagues. I hope the fact that he passed in this blessed month of Ramadan will be of some solace to all of us.”
An example of the life Bashir led can be found in his most recent blog here: http://fosis.org.uk/blogs/president/1605-reflections-of-a-fosis-president
Shortly before he died, Bashir launched a personal campaign to raise £165,000 to raise money for wells and provide safe, clean drinking water to some of the poorest people in the world. Let us remember Bashir’s legacy by ensuring this amount is raised within this blessed month of Ramadan https://www.justgiving.com/ThirstRelief2015
The Federation of Student Islamic Societies is one of the oldest Muslim organisations in the UK representing some 115,00 British Muslim students. It is also a founding affiliate of the Muslim Council of Britain.