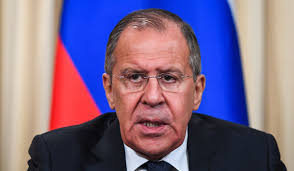 Russian Foreign Minister Sergei Lavrov said on Friday Russia will expel British diplomats in response to London’s decision to expel 23 staff at the Russian embassy in London.
Asked by a Reuters reporter, at a summit on Syria in the Kazakh capital, if Russia planned to expel British diplomats, Lavrov replied: “We will, of course.” He did not give any further details.