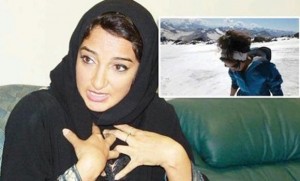 Raha Moharrak, the first Saudi woman to climb Mount Everest, was honored at a ceremony held by the General Presidency for Youth Welfare in Riyadh on Saturday.
Salman Saidane, president of the Sports Federation, said during the ceremony that Moharrak’s accomplishment was of national importance.
Moharrak attributed her achievement to her family that “supported me, trusted my abilities and stood by my side in order to accomplish such an achievement for my country.”
Moharrak noted that the embarking on the achievement came with its risks.
“My determination and willpower helped me achieve my goal. I was able to climb 5,895 meters to the highest point in Africa, Mount Kilimanjaro in Tanzania.”
She added that she also climbed Mount Elbrus in Russia, reaching a height of 5,642 meters in August 2012, followed by Mount Vinson in Antarctica in January 2013. She then climbed the highest mountain in South America, Mount Aconcagua in Argentina, at a height of 6,960 meters, in February 2013.
Moharrak mentioned said she would be pleased to play a role in changing negative perceptions about Saudi woman and how Saudi women perceive themselves.
“What I have done is purely personal. I have not done any of this for specific gain, but if I manage to change people’s perceptions and the world’s perceptions about Saudi women, or the perception of Saudi women about themselves, I would truly be very pleased.”