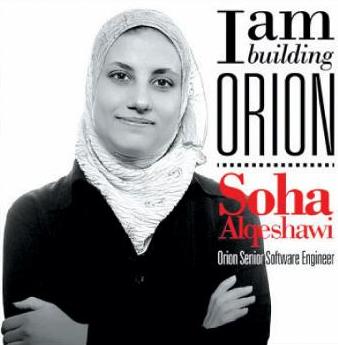 The story of engineer Soha Al-Qeshawi was published on NASA’s Arabic Facebook page as a success story. She is a brilliant young, Muslim woman of Palestinian origin, from the Gaza strip.
Middle East Monitor reported her as saying, “As a senior software engineer working on Orion, I am responsible for software/hardware integration and testing to ensure all the spacecraft’s computer commands perform as expected for America’s next generation spacecraft designed for deep space exploration.”
Al-Qeshawi described her role within NASA’s program, “Working with bits and bytes all day is much cooler than you might think. I get to simulate Orion missions almost every day, just as if we are flying in space. I test the systems from launch, through flight and back to Earth.”
Regarding her role in the system, she explained, “If I find any issues, I resolve them and retest to ensure a smooth and safe flight for our future crews.”
NASA’s Orion spacecraft is built to take humans farther than they have ever gone before. Orion will serve as the exploration vehicle that will carry the crew to space, provide emergency abort capability, sustain the crew during the space travel, and provide safe re-entry from deep space return velocities.
The agency launched the first test flight of the spacecraft in December 2014, with crewed missions possibly following in the early 2020s. Orion is supposed to carry up to six astronauts to destinations such as a captured asteroid or within reach of Mars.
Orion’s first test flight was unmanned and was launched on December 5th, 2014. This test flight marked the first time a spacecraft built for humans has flown outside low-Earth orbit in more than 40 years, since the last mission of the Apollo program in 1972.
The space capsule seemed to perform nearly flawlessly during its 4.5-hour test flight, NASA officials said. Orion soared 3,600 miles (5,800 kilometers) above Earth before turning around for a high-speed re-entry.
The parachutes and huge heat shield on Orion seemed to work well during flight.
The spacecraft beamed back some amazing images of the limb of the planet from its window during the test before it splashed down in the Pacific Ocean. U.S. Navy officials have now fished Orion out of the ocean, and the craft is being transported back to Florida where scientists will collect the data it recorded during its flight.
Crewed missions, according to the current NASA schedule, will take place in 2021
As for Al-Qeshawai she had some words of advice to encourage other to pursue their ambitions.
“My advice to young girls around the world: always have a dream, dream big, and work really hard to make your dream come true. Mine did.”