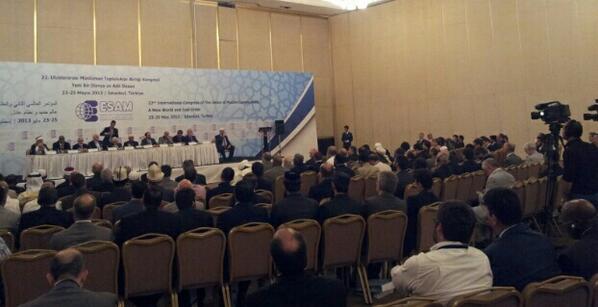 The Economic and Social Research Center (ESAM) has organized the 23rd Congress of the International Union of Muslim Communities which is taking place in Istanbul on Thursday at the Holiday Inn Airport Hotel.
Hosting 120 politicians and academics from 50 countries, the congress was opened with a recitation of the Quran.
The congress – entitled ‘Global Threats and Islamic World’ – brought together politicians and opinion leaders to discuss problems in the Islamic world.
Speaking at the same congress, Developing Eight, D-8, Secretary General Seyed Ali Mohammad Mousavi said that the organization had “created both opportunities and challenges for developing countries, conscious of the deep-rooted and sincere aspirations of humanity for peace, dialogue, cooperation, justice, equality and democracy”.
The eight-nation body is scheduled to hold its ninth summit in Turkey later this year.
Far-right gains in Europe ‘could fuel Islamophobia’
Gains for far-right parties in the European Parliament elections could cause an increase in Islamophobia in Europe, Turkey’s Deputy Prime Minister has said.
Emrullah Isler, speaking in Istanbul at the 23th Congress of the International Union of Muslim Communities, organized by Economic and Social Research Center, said low voter turnout – 43 percent – showed “there is a decrease in European citizens who believe in democracy”.
Isler blamed this lack of belief on the West’s “unjust and double-standard policies”.
Far-right parties shocked observers with a strong performance in the European Union-wide vote which was held between May 22 and 25.
Referring to the 2010 ‘Arab Spring’, Isler said that the events began against years-long oppression, and represented the voice of people who went to the streets to say ‘enough’ to economic, political and social failures.
People showed their demands in a strong way for the first time in the history of the region, Isler added.