Lutfur Rahman was re-elected as Tower Hamlets mayor at the Troxy on Saturday morning after a bitterly fought campaign.
Labour’s John Biggs recorded 27,643 first preference votes, enough to take the count to second preferences.
However, with just 6,500 second votes, he fell short of the current mayor’s total of over 36,500 first votes and 854 seconds.
Speaking afterwards, Mr Rahman, representing his party, Tower Hamlets First, said: “All I ever wanted was to work on an equal playing field. I never asked for a favour from anyone but to see such obstacles in my way I found difficult.”
Mr Biggs took to the stage and was booed, leading him to retort: “Be a bit respectful. This is a democracy and you have to listen to what we say.” 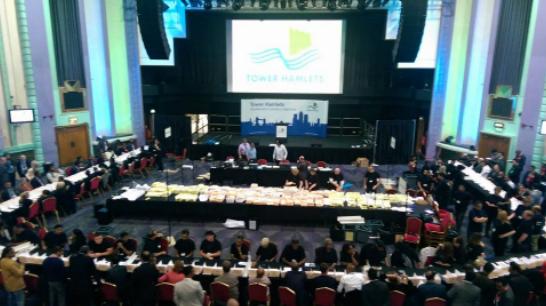 He added: “We should be proud with have one of the highest turnouts of anywhere in London. Can I congratulate Lutfur Rahman and I will continue to work with him.
“Tower Hamlets is a great place to live. I love representing Tower Hamlets in City Hall and whether we have a One East End or a Tower Hamlets First – or Respect as it was in the past – we need to respect and to work together and it’s my pledge to try to do that.
“Together we can be unbeaten as a community, if we’re divided we’ll be taken apart.”
It was a night that had everything you would expect in terms of drama from a Tower Hamlets’ election. Early expectations were it would finish by 4.30pm, or 6pm if there was a second preference count. 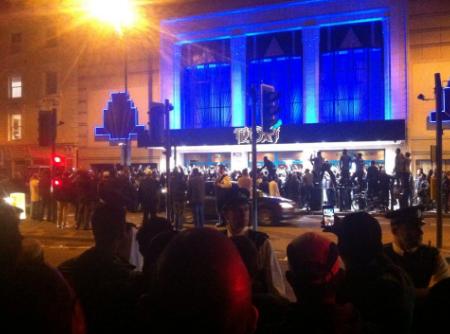 However, with excited crowds surging outside, warnings of arrests from the returning officer over leaks, plus a seemingly almost overwhelming number of ballot papers that needed adjudication, the event continued until the early hours of the next morning.
After the verification it was announced the vote saw a huge turnout of over 47%, well above the national average, and far exceeding the 2010 Tower Hamlets mayoral total of just under 25%. Overall 86,542 took part in this year’s vote.
For the next few hours rumours spread like wildfire around the huge Troxy hall, with momentum changing from one of the leading candidates to the other every hour.
Counting finally began for the first votes at 6.30pm and carried on much longer than the anticipated two hours.
At 9pm the hall was told the returning officer was going through papers that needed adjudication.
And then half an hour later, an announcement came from the stage warning against those passing messages from inside the venue to those on the street.
It came just after reports of a man with a piece of paper heading out of the Troxy and making an announcement in Bengali, which led to cheers.
The crowd were excited and surged forward.
Meanwhile, shadow minister Sadiq Khan, trying to leave the building, was seen to be stopped by police – apparently for his own safety – until he managed to convince them to let him go.
Mr Lutfur Rahman then went to see the crowd, seemingly asking for calm, which was met with more cheers.
A much longer wait ensued until, just after 11pm, the returning officer summoned candidates to the stage.
Words soon spread that second votes would be needed with Mr Rahman clearly taking the most first preferences but not an overall majority, meaning he would go head to head with Mr Biggs.
The Labour team had earlier been confident that if it went to a second count Mr Biggs would secure victory, especially with the large turn out, but from the look of bravado on the faces of Mr Rahman’s team it seemed a tough ask for the challenger.
Party blogsite Labourlist.org was also throwing in the towel repeating rumours of “a recount and Lutfur almost certainly winning”.
The crowd outside remained as papers were being counted, but the mood inside was tense for Labour and Tower Hamlets First supporters.
But just after 1am, with the counting seemingly finished, Mr Rahman’s team gathered in a big group on the count floor, giving the victory sign to the Bengali television crews above. Labour’s team seemed to have disappeared and the signs looked ominous for Mr Biggs’ campaign.
They then re-emerged and gathered close to the stage, Mr Biggs alone and seated, as he gazed down at notes in front of him.
By 1.30am the returning officer finally asked the mayoral candidates on to the stage and the decision was announced.
Mr Rahman would be mayor again.