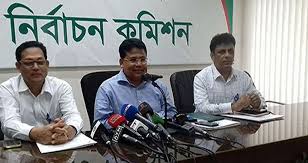 The Election Commission has planned to hold the 11th national election in the last week of December next.

“Our plan is to arrange the election at the end of December …it may be in the last week,” EC Secretary Helaluddin Ahmed told reporters at his Nirbachan Bhaban office here on Tuesday while replying to a question.

He said school students enjoy vacation at the end of December.

The EC Secretary said though the EC is getting ready to acquire capacity to use electronic voting machines (EVMs) in one-third polling stations in the next general election, it has yet to take any decision over its use in the national election.

“If all the parties agree, the EC has a plan to use EVMs in the parliamentary elections. So, we’ve to take preparations right from now,” he said.

Helaluddin said the Commission has sent a project proposal to the Planning Commission to procure some 1.5 lakh EVMs.

With 1.5 lakh EVMs, the voting in one-third polling stations can be arranged fully with the electronic machines, he said adding, “To use EVMs in the national election, there should be a legal base first.”

Helaluddin said it is necessary to amend the Representation of the People Order (RPO) to incorporate provisions to pave the way for using the electronic machines instead of ballot paper.

The EC Secretary said the Commission will sit in a meeting on August 30 next to discuss the RPO amendment.

If the EC takes decision to incorporate EVM-related provisions in the RPO, then the proposal for the RPO amendment will be sent to the Law Ministry for its vetting, he said.

“Once the law is passed (in Parliament), the Commission may have discussions with political parties (to receive their opinions over EVMs). Then the decision will be taken whether the EVM can be used in the parliamentary elections,” he said.

Helaluddin said the use of EVMs in the next national election depends on several factors, including having a legal base in the RPO, approval of the project to procure EVMs, political parties’ opinion and training of election officials and awareness of the voters.

Now the Election Commission has only 380 EVMs in hand, which were used in different local body elections on small scale.

Helaluddin said the EC has already completed 80 percent of its preparatory for the next national election.

Mentioning that the countrywide Upazila Parishad polls will be held after the 11th national election, he said the EC has a plan to use the EVMs in the local body elections.