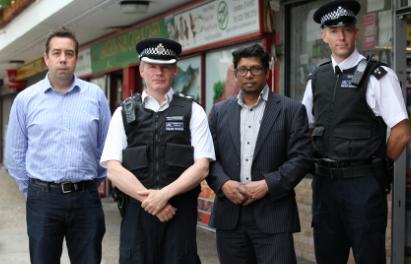 A Dispersal Area has been authorised around Spey Street to tackle anti social behaviour and keep local residents safe, a year after the tragic death of 16 year old Ajmol Ali on the same street.
Local police, in partnership with housing Association Poplar HARCA, found the local community was still affected by the death of the young resident and had concerns over anti social behaviour and young people out on the streets.
The new dispersal zone gives the police the power to move people from the area for a maximum of 24 hours, if their presence or behaviour is deemed anti-social. Refusal could lead to 3 months imprisonment as well as a £2,500 fine.
ASB manager Jamie Lock said “Poplar HARCA has funded the dispersal zone to ensure that its residents are free from anti social behaviour. Police and Harca staff door knocked the area and found residents were very keen for it to be implemented.”
Tower Hamlets Borough Commander Dave Stringer and Cllr Ohid Ahmed, Cabinet Member for Community Safety, officially launched the Dispersal Area at Spey Street on Friday 25th July.
Police hope improved facilities for young people hold the key to halting anti social behaviour in the local area. The new Spotlight centre attached to Langdon Park School has already been used by over 700 young people since opening in January. The creative hub aimed at young people has a state of the art boxing gym, technology suite, music studio and dance facilities.
Borough Commander Dave Stringer said “Alongside the Dispersal zone we will encourage safe and appealing spaces for youths to gather away from the residential properties, giving residents their right to a peaceful home life and a place where youths can socialise.”