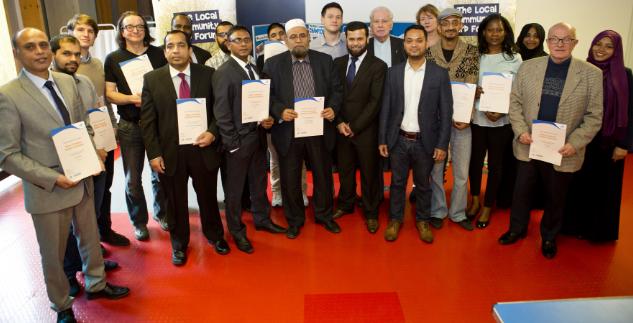 Tower Hamlets Council is continuing to give power to local people by asking them to decide how best to spend money for their area.
Residents have volunteered to oversee the spending of £10,000 from the council for improvements in each ward, through Local Community Ward Forum meetings.
The Mayor’s Community Champion Coordinators play a vital role in supporting the actions of the Local Community Ward Forum in your area.
All 38 new Mayor’s Community Champion Coordinators were awarded certificates and thanked personally by Deputy Mayor Cllr Oliur Rahman at an awards ceremony on Saturday (November 29).
New Community Champions will join with previous Champions in running public meetings for each ward, starting in January.
During these meetings they will facilitate discussion between residents to set priorities and to see how the funds can be best spent to improve their areas.
Mayor of Tower Hamlets, Lutfur Rahman said: “We are very proud to be extending the Community Champion Coordinators programme for another year. Nobody is more knowledgeable about a local community than the people living there, so it makes perfect sense to let them decide how to improve it.
“I urge as many people as possible to take advantage of this great opportunity to shape your area’s future and I thank our new champions for dedicating their time to help improve the borough.”
The council is stressing the Coordinators are only responsible for the Forums – other local issues should be directed through ward councillors.