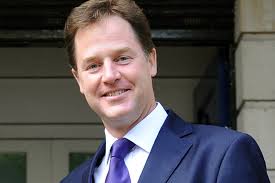 Nick Clegg has resigned as Liberal Democrat leader after his party was routed at the general election.
The Lib Dems are set to end up with just eight MPs, down from 57 in 2010.
Energy Secretary Ed Davey, Business Secretary Vince Cable and Treasury Secretary Danny Alexander all lost their seats.
Mr Clegg said the results were “immeasurably more crushing” than he had feared, saying it had been a “huge honour” to lead the party.
In a speech in London, he confirmed a leadership election would now take place to replace him.
“It’s simply heartbreaking to see so many friends and colleagues who have served their constituents over so many years abruptly lose their seats because of forces entirely beyond their control” he said.
Mr Clegg, who held seats, added that “fear and grievance have won, liberalism has lost”.
History would judge his party more kindly than the electorate, he said, pointing to some of the measures the Lib Dems had championed in government.
Other senior Lib Dems to fall were former schools secretary David Laws, former party leader Charles Kennedy and former deputy leader Simon Hughes.
Mr Davey, previously tipped as a possible party leader, lost his Kingston and Surbiton seat to the Conservatives.
Nearby in south west London, Mr Cable lost his Twickenham seat, also to the Conservatives.
Both attributed their defeats to a combination of coalition and Conservative warnings about the threat of a Labour/Scottish National Party administration.
Nick Clegg’s political journey has seen him win a bitter Liberal Democrat leadership battle, rise to become deputy prime minister, and face furious criticism over his U-turn on tuition fees.
But despite retaining his own parliamentary seat in 2015, he has resigned as Lib Dem leader after disastrous election results saw the party crushed at the polls.
He was once mentioned in the same breath as Winston Churchill and took his party up to notable highs and now down to painful lows in its popularity.
Mr Davey said his party had “paid some price” for joining a coalition government but he had “lost on Conservative warnings” of a Labour government propped up by the SNP.
Mr Cable said it had been “a terrible night”, but the party would “bounce back”.
Mr Alexander told the BBC: “I lost my seat, that’s democracy. Worse things happen to people.”
He said he hadn’t expected the results to be “as bad as this”, and said the party had “a lot of thinking to do about how to keep the flame of liberalism alive” against what he described as “the forces of nationalism and anti-Europeanism”.
Former Lib Dem leader Paddy Ashdown told the BBC he was “immensely proud that we put the national interest first” by forming a coalition in 2010, adding: “We will be back.”
Norman Lamb, who served as a coalition health minister and who held on to his Norfolk North seat, said it felt like an “unwritten rule of politics” that the smaller party in a coalition “loses out”.
Veteran Lib Dem MP of 32 years Simon Hughes lost his Bermondsey and Old Southwark seat in London to Labour’s Neil Coyle.
In Scotland, Charles Kennedy, MP for Ross, Skye and Lochaber for 30 years, and leader of the party from 1999 to 2006, lost his seat to the SNP.
Lib Dem employment minister Jo Swinson lost her East Dunbartonshire seat to the SNP’s John Nicolson with a swing of 16%.
Home Office minister Lynne Featherstone and whip Jenny Willott also lost their seats.
Former Liberal Democrat president Tim Farron successfully held his seat in Cumbria’s Westmorland and Lonsdale.
Paddy Ashdown: “It’s the very last time I will question a BBC exit poll”
Scottish Secretary Alistair Carmichael was re-elected in his Orkney and Shetland seat in Scotland, despite a swing to the SNP of 24%.
Earlier in the evening, Lord Ashdown said he would “publicly eat his hat” if predictions the party would lose 47 seats were correct.
He told the BBC this was a “certain error” and the party’s own polling indicated it would fare better.
He later admitted it had been a “bitter, painful and cruel” night for the Liberal Democrats – and accepted that he “now has to eat his hat”.
Many Lib Dems have lost their £500 deposit, which is not returned to candidates who get below 5% of votes cast.
The party did not lose any deposits in the 2010 general election.
On the eve of the election Mr Clegg insisted his party would be the “surprise story” of polling day, defying predictions of an electoral mauling.
Mr Lamb, who is widely expected to stand for the leadership of his party, said the Liberal Democrats needed a “period of reflection”.
“It’s not a good time to be making big decisions when we’re all utterly exhausted,” he said.