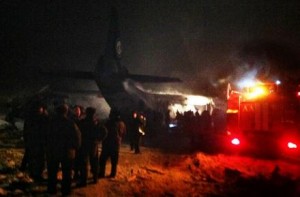 Nine people were killed when a Russian cargo plane crashed into a military warehouse on the outskirts of the Siberian city of Irkutsk, the Emergencies Ministry said.
There were nine people on the plane on Thursday: six crew and three people accompanying the cargo.
“They all died,” the Emergencies Ministry said in a statement.
No casualties were reported among ground staff following the crash.
The Antonov An-12 military transport plane was carrying aircraft parts from a factory in Novoskbirsk when it crash-landed at the Irkutsk-2 airport, according to Russian news reports.
A fire broke out at the crash site, but was quickly extinguished, according to Andrei Shutov, a ministry spokesman.
More than 100 rescue workers combed through the debris, AFP news agency reported.
The cause of the accident was not immediately known.
Russia has experienced a string of deadly airline crashes in recent years, most of them involving small regional airlines.