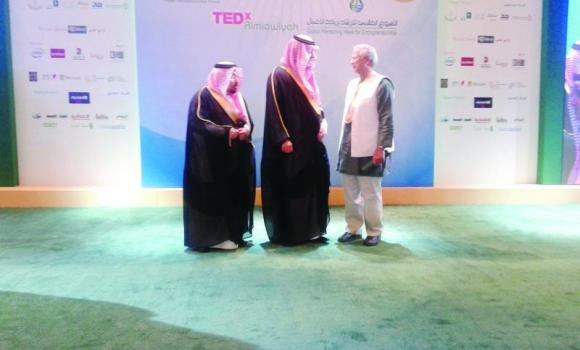 The excellent reputation of Professor Muhammad Yunus preceded him when he came to the Saudi capital on Monday night as the winner of the 2nd Global Entrepreneurship Award (GEA 2014). Visitors at the awards ceremony had their eyes fixed upon him as he entered the Ritz-Carlton in Riyadh, whispering among themselves about who he was and what he had done to win the top award of The Centennial Fund (TCF).
Yunus is the father of the “Microfinance” concept for development, and founded the Grameen Bank in Bangladesh on the premise that the poor are creditworthy. In 2006, Professor Yunus and the Grameen Bank were jointly awarded the Nobel Peace Prize.
He also founded the Grameen America, which is dedicated to helping women who live in poverty build a small business to create better lives for their families in the United States.
Watching from his front-row seat, he simply and silently observed the proceedings on stage. But behind the impression of simplicity was a noble mind and a generous spirit. As soon as it was time for him to address the admiring crowd, he walked toward the podium confidently. Talking in a clear voice that carried his strong personal and professional conviction to help the poor, he explained his mission as the extension of loans without the need for internal profits.
“What we’re doing is not a Bangladeshi phenomenon; it’s global. The first mission for an aspiring entrepreneur is to learn how to be an entrepreneur,” he said, his voice resonating inside the hall.
What he said appeared to have rubbed off on the audience whose turn it was to become silent. Nothing was heard except the little sounds made by the photographers’ rolling cameras.
Bangladeshis in the Kingdom felt proud of their fellow countryman who had made such a positive impact, not only in South Asia, but all over the world where poverty exists.