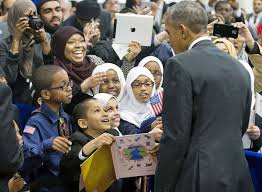 Seven years into his presidency, Barack Obama was scheduled to make his first trip to an American mosque on Wednesday, offering a symbolic rebuttal of harsh Republican election rhetoric against Muslims.
Obama, whose grandfather converted to Islam, would make the short helicopter ride to the Islamic Society of Baltimore mosque, where he would meet community leaders and deliver remarks.
He has visited mosques from Malaysia, to Indonesia and Egypt as president, but has yet to visit one America’s 2,000-plus places of Islamic worship.
In 2009, a freshly elected Obama traveled to the Egyptian capital to call for a “new beginning” with the Muslim world.
Much of Obama’s foreign policy agenda has focused on improving ties with Muslim nations, from making a nuclear deal with Iran to improving ties with Indonesia and ending wars in Iraq and Afghanistan.
But the effort has been stymied by continued confrontation with militant groups and military strikes in Afghanistan, Iraq, Libya, Pakistan, Somalia, Syria and Yemen.
His latest effort to ease intra-faith relations comes as a shrill election debate has sullied America’s image abroad and militant attacks in San Bernardino and Philadelphia threatened to shatter post-9/11 religious solidarity at home.
Six days after the 2001 attacks in New York and Washington, then president George W. Bush visited the Islamic Center of Washington, declaring “Islam is peace.”
Today Republican presidential candidate Donald Trump has wooed conservative voters by demanding a ban on Muslim immigrants, while frontrunner Ted Cruz has advocated Christian-only admissions and championed “Judeo-Christian values.”
The White House is keen to offer a different image of America and draw a contrast between what it calls Republican’s “divisive rhetoric” and the country’s secular tradition.
White House spokesman Josh Earnest said Obama will “affirm the important role that Muslim Americans play in our society” and argue that “law-abiding Americans should be able to worship God in the manner that they see fit.” “And they shouldn’t be subject to ridicule or targeting by anybody, let alone somebody who aspires to leading the country,” Earnest added.
“We have seen an alarming willingness on the part of some Republicans to try to marginalize law-abiding, patriotic Muslim Americans, and it is offensive.”
Obama is also likely to restate his case that groups like Islamic State pervert Islam and do not represent the vast majority of Muslims.
The United States is home to around 3.3 million Muslims. Around 81 Muslim-Americans were involved in violent extremist plots in 2015, according to the Triangle Center on Terrorism and Homeland Security.
But Obama is also expected to call on Muslim leaders to help tackle radicalization.
“We know that there are extremist organizations like Daesh that are seeking to use social media to radicalize vulnerable members of the population,” said Earnest.
“Certainly the leaders in the Muslim community have a strong interest in preventing that from happening.” — AFP