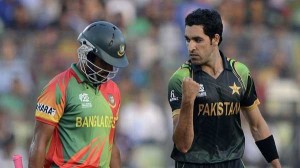 Pakistan beats Bangladesh by fifty runs. Earlier 191-run target sets by Pakistan in their third match against host Bangladesh of the ICC World T20 on Sunday at Sher-e-Bangla National Stadium in Mirpur.
Amazing Ahmed Shehzad hit the first century facing only 58 balls in the World T20, 2014 tounament. He was powered the Pak innings scoring an unbeaten 111 off only 62 deliveries hitting 10 boundaries and five superb maximums.
Razzak made the much desired breakthrough for tigers. Kamran Akmal was sent back to the pavilion after Abdur Razzak’s spin attack and a super catch by Zia.
Another sensible Razzak delivery thumped Mohammad Hafeez as he was confused in the delivery and stumped by Mushfiqur Rahim.
Kamran Akmal was also sent back to the pavilion after Razzak’s spin attack and a super catch by Zia.
He sent back adding only 9 runs in Pak total. Sakib and Mahmudullah took one wicket each for tigers.
Earlier, Pakistan won the toss and chose to bat.
A win for Pakistan would set up a straight shootout between them and West Indies for the second semi-final spot from Group 2, and knock Australia out of the tournament.