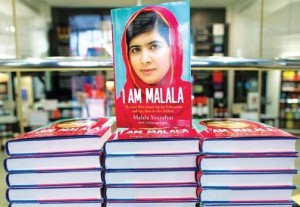 Pakistani education officials said Sunday that they have banned teenage activist Malala Yousafzai’s book from private schools across the country, claiming it doesn’t show enough respect for Islam and calling her a tool of the West.
Malala has become a hero to many across the world for opposing the Taleban and standing up for girls’ education, conspiracy theories have flourished in Pakistan that her shooting was staged to create a hero for the West to embrace.
Adeeb Javedani, president of the All Pakistan Private Schools Management Association, said his group banned Malala’s book from the libraries of its 40,000 affiliated schools and called on the government to bar it from school curriculums.
“Everything about Malala is now becoming clear,” Javedani said. “To me, she is representing the West, not us.”
Kashif Mirza, the chairman of the All Pakistan Private Schools Federation, said his group also has banned Malala’s book in its affiliated schools.
Malala “was a role model for children, but this book has made her controversial,” Mirza said. “Through this book, she became a tool in the hands of the Western powers.” He said the book did not show enough respect for Islam because it mentioned Prophet Muhammad’s name without using the abbreviation (Pbuh) — “peace be upon him”.
He also said it spoke favorably of author Salman Rushdie, who angered many Muslims with his blasphemous book “The Satanic Verses,” and Ahmadis, members of a minority sect that have been declared non-Muslims under Pakistani law.
Malala mentioned in the book that Pakistan’s population of 180 million people includes more than 2 million Ahmadis, “who say they are Muslim though our government says they are not.” “Sadly those minority communities are often attacked,” the book said, referring also to Pakistan’s 2 million Christians.