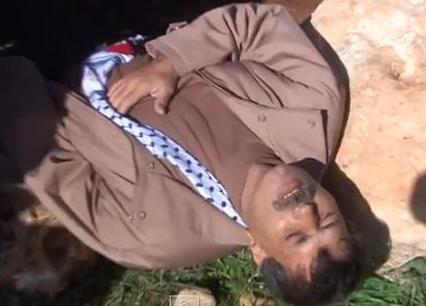 A Palestinian minister died shortly after being hit by Israeli soldiers during a protest on Wednesday in the occupied West Bank, a Reuters photographer who witnessed the incident and a Palestinian medic said.
Ziad Abu Ein, a minister without portfolio who was in his early 50s, was rushed by ambulance from the scene, in the village of Turmusiya, but died en route to the nearby Palestinian city of Ramallah.
Palestinian President Mahmoud Abbas, in a statement, called Abu Ein’s death “a barbaric act which we cannot be silent about or accept.” Announcing three days of national mourning, Abbas said he would take “necessary steps” after an investigation.
The Israeli Army was looking into the incident, a spokeswoman said, She did not immediately provide further information.
About 100 foreign and Palestinian activists with the Committee to Resist Settlements and the Wall, the government-run protest organization that Abu Ein headed, were on their way to plant trees and protest near an Israeli settlement when they were stopped at an improvised checkpoint, witnesses said.
A group of around 15 Israeli soldiers fired tear gas at the protesters and began scuffling with them.
Abu Ein was struck by a hand to the neck during an altercation with two of the soldiers, and was rushed away in an ambulance shortly afterwards, the Reuters photographer said.
Bilateral tensions have been fueled in recent weeks by the killing of 10 Israelis and a foreign visitor in Palestinian attacks. More than a dozen Palestinians have been killed over the same period, including most of those accused of carrying out the assaults.
Palestinians in Ramallah closed shops in protest at the minister’s death and youths threw stones at Israeli soldiers guarding a Jewish settlement outside the city, Palestinian security sources said.