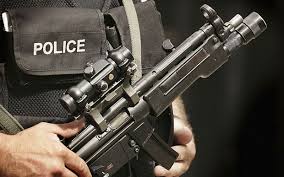 Two 16-year-olds have been arrested near Manchester under counter terrorism legislation and police said on Tuesday they were searching two properties on the basis of intelligence reports.
Officers from the North West Counter Terrorism Unit (NWCTU) detained a boy and a girl in the town of Mossley on Monday, Greater Manchester Police said in a statement.
Chief Superintendent Caroline Ball said there was no immediate threat to the community and that police had acted on information from law enforcement agencies.
“It is prudent we act on that information and carry out a thorough, professional investigation to determine the circumstances and details of the activity reported,” she said.
Also on Tuesday, a 29-year-old man was arrested in Stoke-on-Trent on suspicion of encouraging terrorism and supporting Islamic State of Iraq and Syria (ISIS) in online postings, West Midlands police said in a statement.
No further details on either case were immediately available.