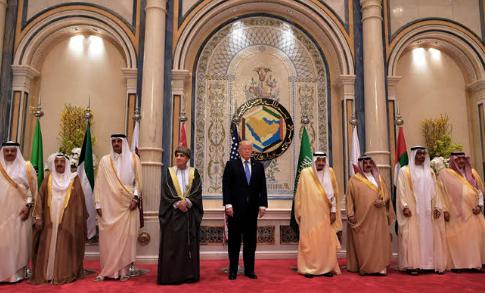 The much-anticipated US-GCC Summit has kicked off as US President Donald Trump sat down with Gulf leaders at the King Abdulaziz Conference Center in Riyadh.
Minutes before the commencement of the meeting, US Secretary of State Rex Tillerson exchanged a Memorandum of Understanding on countering the financing of terrorism with Saudi Crown Prince Mohammed bin Naif bin Abdulaziz Al Saud.
Gulf leaders from Saudi Arabia, the UAE, Bahrain, Qatar, Oman and Kuwait are meeting with Trump to discuss threats to regional security and stability and the building of stronger commercial ties between the US and the Gulf.
The American president first held bilateral meetings with Bahrain’s King Sheikh Hamad bin Isa Al Khalifa and also met with Egyptian President Abdel Fattah El Sisi.
Trump said that Washington’s relations with Bahrain were set to improve and also said that he would accept an invitation made by the Egyptian president to visit Egypt. Trump said the visit would happen before long.
Of Bahrain, Trump said: “Our countries have a wonderful relationship together, but there has been a little strain, but there won’t be strain with this administration,” Trump said during a photo session with Sheikh Hamad bin Issa Al Khalifa.
“We’re going to have a very, very long-term relationship. I look forward to it very much — many of the same things in common.”
The day of meetings will be followed by the Arab-Islamic-American Summit during which Trump is set to give a much-awaited speech on Islam.
Also today, King Salman and President Trump are set to inaugurate the Global Center for Combating Extremist Ideology (GCCEI), which will counter and prevent the spread of extremist ideology through promoting moderation, compassion and supporting the dissemination of positive dialogue.Yesterday, Saudi Arabia and the US agreed a “Joint Strategic Vision Declaration” covering aspects like diplomacy, trade, security and the fight against terror.
It was co-signed by King Salman and d Trump at the Al-Yamamah Palace in Riyadh.
The White House said in a statement that the declaration reflects the two countries’ efforts to boost “their strategic partnership for the 21st century” and to chart “a renewed path toward a peaceful Middle East where economic development, trade and diplomacy are hallmarks of regional and global engagement.”
The two nations plan to form a Strategic Joint Consultative Group, hosted by the US president and Saudi king, or their appropriate representatives, to chart the course of this strategic partnership. It will meet at least once a year, alternating between the two countries.
“Our two great countries share a desire to address the threats to our shared security interests. Thus, the United States of America and the Kingdom of Saudi Arabia seek to embark on new initiatives to counter violent extremist messaging, disrupt financing of terrorism, and advance defense cooperation,” the White House statement said.