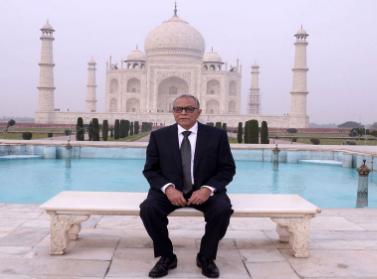 President Abdul Hamid today visited Taj Mahal, the Mughal-era mausoleum known as testament to Emperor Shah Jahan’s love for his wife Mumtaz Mahal.
The President spent about 30 minutes at the monument of love, a 17th century monument and now a world heritage.
Abdul Hamid was briefed about the monument by the officials of tourism ministry of India.
The President also signed the visitor’s book of Taj Mahal, one of the universally admired masterpieces.
Later, Abdul Hamid also visited Agra Fort, one of the architectural beauties of Mughal era.
Earlier in the day, he arrived in Agra as part of his six-day state visit to India.
A special flight of Air India carrying the President and his entourage left Palam Airport of New Delhi at 11.50 am and reached Agra Kheria Air Force Airport at around 1 pm. Divisional commissioner of Agra and other officials received the President.
Abdul Haimd was driven to Oberoi Amarvilas where he will stay during his visit to Agra.
The President came to India on December 18 at the invitation of his Indian counterpart Pranab Mukherjee.