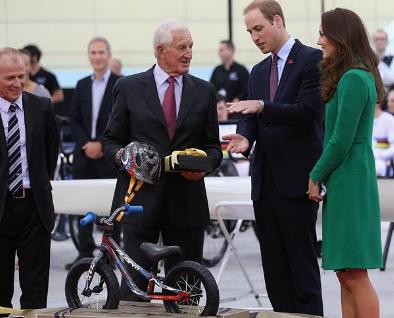 The Duchess of Cambridge carried out her first solo engagement Saturday on her New Zealand tour for a fact-finding visit to a children’s hospice where she told the curious youngsters that even royals have to eat all their vegetables.
Catherine was welcomed by more than 40 children and their families at the Rainbow Place hospice in the North Island city of Hamilton.
The duchess has strong ties with children’s hospices in Britain and was said to be using the New Zealand visit as a fact-finding study on palliative care.
“I’m sure you’re all going through difficult times and so it’s really good to have a place like this, to be able to talk about your feelings and to meet other people who are going through the same thing.
“There should be more places like this,” she told the children before taking questions which included youngster Lee Thomson asking if royalty also had to eat all their vegetables.
“Yes I do. I have to eat all my vegetables and so does George,” she replied.
Kate’s probably more used to canapés and fine dining, but she was treated to jellied eyeballs, huhu grubs, flower pots of sweet chocolate mud and crispy chicken lolly pops.
She later joined William in opening a new velodrome in the nearby town of Cambridge where about 15,000 people lined the streets to greet the couple despite pouring rain.
After meeting members of New Zealand’s sporting elite including world and Olympic champions in cycling, rowing and canoeing, the couple were presented with a small bike and New Zealand team lycras for George.
Avanti founder John Struthers presented the bike to the royal couple, and quipped: “I hope Air New Zealand doesn’t charge extra baggage”.
Struthers said the prince will have to wait until he’s two-years-old to give the bespoke balance bike a spin. The crowd let out an audible sigh when Kate unwrapped a second present — a black and white lycra Avanti cycling shirt.