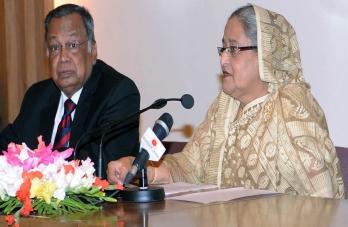 Prime Minister Sheikh Hasina today said Bangladesh is ready to deepen its friendship with the countries those are required for country’s economic development, as prosperity of the people remains at the top of her government’s consideration.
“It will be our diplomatic success to take forward the country by maintaining relations with all,” she said at a press conference held at her Gonobhaban residence here this afternoon.
The Prime Minister convened the press conference to inform the media on the outcome of her participation in the 18th SAARC Summit in Nepal on November 26-27 and her three-day official visit to Malaysia on December 2-4.
Apart from SAARC and Malaysia visits, the journalists went beyond much detailed on many contemporary social and political issues including relations with Pakistan and USA, recently published TIB’s corruption perception report, meeting of some government officials and employees with BNP chairperson and January 5 election and activities of Chhatra League, student
front of Awami League.
In her nearly hour-long press conference the Prime Minister dealt very lively and vividly with every question, focusing on her government’s relentless stride to sustain the country’s democratic journey and realizing the dream of the war of liberation to establish Bangladesh as a dignified nation amidst world comity.
As asked about her position on a recent comment of her cabinet colleague about Nisha Desai Biswal, US Assistant Secretary of State for South and central Asian Affairs, the Prime Minister said responsibility of any comment or remark should go to that particular person who made it. ‘Better ask him about this,” she said.
Sheikh Hasina said a nation which has earned freedom through war, can go forward for its own prosperity. However, we want good relations with all countries. “We want to go ahead maintaining relation with all as our nation’s Founding Father envisaged our foreign policy – “Friendship with all, malice to none’.
‘So our foreign policy is very transparent. It does not matter whether it is bent to west or east, south or north,” she added.
About the recently published TIB’s corruption perception report, the Prime Minister said, the organization never probed into the corruption of moneyed men. Rather, it always ran after the transaction of the low-income group of government employees,
police or workers.
“TIB never published any report how many people have made fortune overnight and how military dictators gave the corruption a deep root,” she said adding both the electronic and print media of the country also never came forward to expose the big corrupts. Rather, in some cases media has accepted the leadership of the corrupt persons who became owner of newspapers and television channels using their illegally gotten money.
Sheikh Hasina said we never claim that we have made the country completely free from corruptions. Military dictator Zia sowed the seeds of corruption in the country which was nurtured and turned unbridled during the regime of Ershad and BNP.
“So we never claim that Bangladesh is totally free from corruption,” she said adding TIB must say on whether the government is indulging in corruption.
“Over the last six years Bangladesh achieved success in every sector. The country would have never achieved six percent annual average growths if corruption was prevailing everywhere,” she said adding Bangladesh lagged behind in every sector during BNP regime because of their unbridled corruption.
About the report on meeting of a section of government officers and employees with BNP chairperson last night at her Gulshan office, the Prime Minister said she sees no problem with such call on or meeting.
However, she was sarcastic about Begum Zia’s usual meeting with different sections of people in the night saying “I think she should do everything in the broad day light instead of night.”
She said her government enhanced the salaries and allowances of the government officers and employees 60 to 65 percent. Begum Zia during her five-year rule gave them nothing.
Sheikh Hasina said Bangladesh is a democratic country where
people are enjoying full freedom of thought and speech. However,
law will take its own course, if anybody commits anything illegal
or violates the law.
Replying to a question the Prime Minister said her government is making stride to bring the manpower export to Malaysia to a disciplined order so that the process is not obstructed in future. The Awami League government pursued Malaysia to legalize as many as 2.67 lakh illegal Bangladeshi immigrants.
She said Malaysia has decided to take 60,000 workers from Bangladesh out of which 7,000 have already gone there and rest of the workers would go there gradually. The government would send them by giving them necessary training and knowledge about the law of Malaysia along with a database.
Sheikh Hasina said the government wants a sustainable Bangladeshi manpower in Malaysia and Middle-East counties as well. Flow of people through illegal ways must be stopped in the interest of the both the migrants and the country, she said.
Criticizing the opponents of January 5, 2014 election the Prime minister said the country would have gone under military rule of caretaker government like 2007 if the election was not held. Peace has prevailed in the country and people are living in comfort as the election was held timely, she said.
Around 40 percent people have exercised their franchise which is not seen even in many developed counties, she said without continuity of the democratic government the trial of the war criminals would have been foiled.-BSS