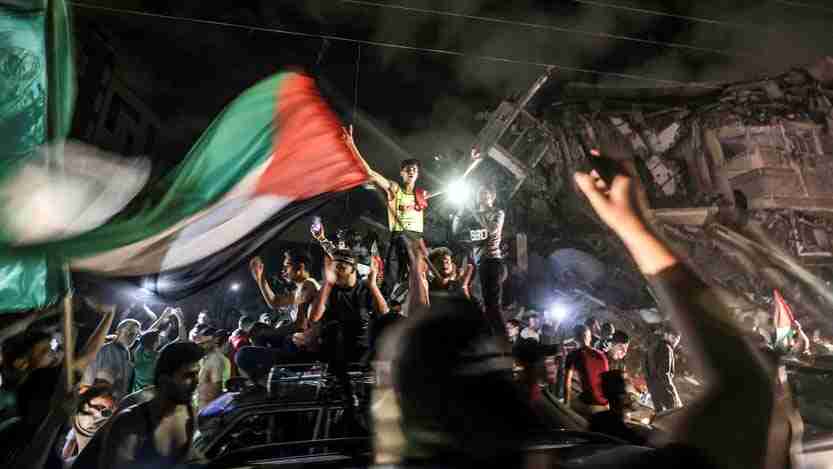 In the early hours of Friday morning, life began to return to normal in the Gaza Strip as a ceasefire agreed by Israel and Hamas came into effect at 2 a.m. Many Gazans took to the streets to express their joy at the end of the war. Some celebrated it as a victory for the Palestinians in their support for Jerusalem and the defeat of Israel. Thousands took part in spontaneous marches and parades, on foot and in cars, chanting religious slogans. Mosques broadcast Eid calls as if the day was a festival.

“We deserve joy, despite the number of martyrs and the destruction in the city,” said Samir Daban, a resident of Gaza, who had attached a Palestinian flag to his motorbike.
After 11 days of fighting, Israel and Hamas agreed a ceasefire during negotiations brokered by Egypt. An Egyptian security delegation arrived in the Gaza Strip at noon on Friday and met the Hamas leadership. It left a few hours later without disclosing any details of the meeting.
More bodies were pulled from the rubble of damaged or destroyed buildings on Friday morning. The Palestinian Ministry of Health in Gaza said 243 Palestinians were killed during the war, including 66 children, 39 women and 17 elderly people, and more than 1,900 were injured.
As he swept away debris and broken glass from around his shop in Omar Al-Mukhtar Street, in the center of Gaza City, Saeed Al-Haddad said he plans to reopen the store on Saturday.
“My shop was not affected much as a result of the bombing of (nearby) Al-Shorouk Tower,” he told Arab News. “But even if the shop was damaged, I would still feel proud that I am from Gaza, and that Gaza achieved victory for the first time. We can say that money did not buy us.
“I went out of my house during the war, and saw some neighboring houses were damaged. My three children were afraid, so I preferred to go to my father’s house and I stayed with him throughout the days of the war.”
The street on which Al-Haddad’s shop stands, which is the city’s main market area, experienced intensive bombing during the conflict. In the hours after the ceasefire took effect it was jammed with traffic. Some motorists flew Palestinian flags from their vehicles, others took photographs of the destruction. Ahlam Al-Madhoun, 43, came with her three daughters.
“I did not expect to see this scene in this street but we are proud of our resistance and in its ability,” she told Arab News. “I feel great sadness for the people who lost their homes, for the families who lost their children, and for the shopkeepers who lost their trade — but the sacrifice must be made for the sake of Jerusalem.
“We could not sleep during the days of the war and since last night we could not sleep either. We wanted to prove to ourselves that we have survived the war and that the war is over. I hope that the coming days will be better.”