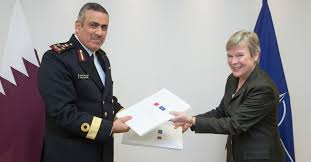 NATO and Qatar on Wednesday signed a military agreement that will allow NATO forces and personnel to enter and transit the country and use an air base there, according to a written statement from the alliance.
The deal came as NATO Secretary General Jens Stoltenberg received Qatari Emir Sheikh Tamim bin Hamad Al Thani at NATO headquarters in Brussels and the two leaders discussed the security situation in the Gulf region and the partnership between NATO and Qatar, the statement said.
The statement said the deal will allow NATO forces and personnel to use Qatar’s Al-Udeid Air Base.
“This will facilitate NATO missions and operations in the region, including the Resolute Support Mission in Afghanistan,” the statement said.
The statement added that NATO and Qatari forces have operated side-by-side in Libya and jointly tackled piracy challenges off the coast of Somalia.