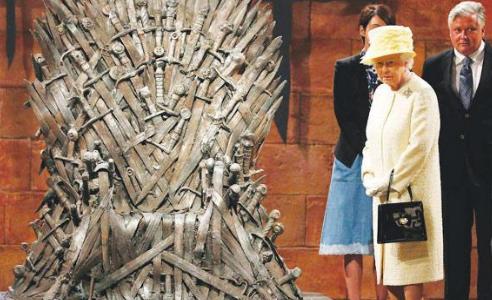 The United Kingdom’s 88-year-old monarch toured the Belfast sets of the hit HBO series “Game of Thrones” and met many of its stars Tuesday beside the show’s sword-covered seat of power, the Iron Throne.
Unlike many visitors to Belfast’s Titanic Studios, the monarch declined to take a seat on the throne created for the ruler of the mythical Seven Kingdoms.
“Game of Thrones” creators David Benioff and Dan Weiss escorted the monarch through the show’s custom-made armory, hangars of costumes, and sprawling sets used to shoot the program’s interior scenes and perilous ice-cliff ascents — part of the biggest TV production ever mounted in Europe.
She chatted with actors Lena Headey, Maisie Williams, Sophie Turner, Kit Harington, Rose Leslie and Conleth Hill.
As well as meeting cast and production staff, the Royal couple were also given a short overview of the series and the impact it has had on Northern Ireland, not only in terms of employment, but also in the creative arts field.
The Queen and Prince Philip also viewed some of the props that have featured in the hit fantasy show.
Before leaving, they were presented with a miniature version of the infamous Iron Throne, which appears in the series.
Earlier, they were greeted as they arrived at the Crumlin Road jail by members of the public waving Union flags.
Inside, the Royal couple were met by a number of dignitaries, including Northern Ireland’s First Minister Peter Robinson and Deputy First Minister Martin McGuinness.
It is the Queen’s first visit to Northern Ireland since 2012, when she came as part of her Diamond Jubilee celebrations.
In the past, details of Royal visits to Northern Ireland have not been announced beforehand for security reasons, but this time around, much of their itinerary has been made public.