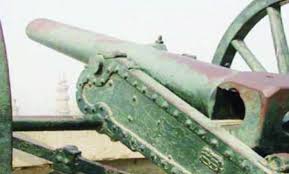 Madinah Gov. Prince Faisal bin Salman has announced that the Ramadan cannon would be used again after 22 years.
Maj. Gen. Abdulhadi Al-Shahrani, director general of the city’s police, has confirmed that it would be back in use during this month, a local publication reported recently.
The cannon was used during the Ottoman era but was later stopped for administrative and technical reasons. Many have called for its return because its use does not contradict Islamic law.
According to reports, Madinah initially had two cannons, one on top of Sal Mount, about 500 meters from the Prophet’s Mosque, and the other inside the Turkish fort in the Quba neighborhood.
They were fired several times to announce the start and end of Ramadan, and every day to signal the time to break the fast, according to the reports.
The announcement coincides with Custodian of the Two Holy Mosques King Salman reinstating several imams at the Prophet’s Mosque, including Sheikh Mohammed Ayoub, who will return to lead the prayers after a 20-year absence.
Ayoub was one of the most prominent voices at the mosque for five years in the nineties and left for administrative reasons. Many people had subsequently called for his return.
Ayoub reportedly received the news from Sheikh Abdulaziz bin Saleh, head of the Madinah courts and head imam at the Prophet’s Mosque. He had asked for the news to be repeated to make sure it was correct.