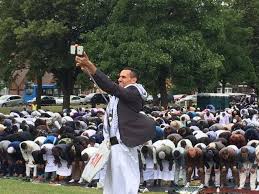 When it first began three years ago, only a few thousand people showed up to the park. However, today, a record-breaking 60,000 men, women and children descended upon Small Heath Park in Birmingham to read the morning Eid-ul-Fitr prayers as Muslims the world over celebrate the end of another month of Ramadan.
Last year, officials said some 44,000 people turned-up to pray.
Today, however, miles of plastic sheeting was spread out in rows along the grass as horns blared in the, at one point, four-mile long traffic jam consisting of thousands of families battling to make it into the park.
After the prayers were over, the crowds quickly livened-up when the Celebrate Eid event roared into life as people from backgrounds flocked into the park to take part in the family activities on offer in what is being described as the ‘biggest Eid celebration in Europe’.
One young attendee, Husna Khan, 21, shared with The Guardian her more contemporary take on this Eid-ul-Fitr: “This is a bit like a music festival for us – our Glastonbury.” -Independent.co.uk