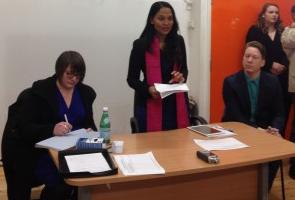 Rushanara Ali MP has this week launched a campaign to secure a fair deal for leaseholders in Tower Hamlets.
Thousands of leaseholders across Tower Hamlets have been sent bills for as much as £40,000 for works to their properties which Tower Hamlets Homes – the Arms Length Management Organisation responsible for the properties – has insisted are paid within twelve months. For huge numbers of residents, these bills are simply unmanageable in such a short space of time.
Speaking ahead of a public meeting on the issue, Rushanara Ali MP said;
“That leaseholders from all walks of life are being hit with such unthinkably high bills to be repaid in only twelve months is unacceptable. Few people would be able to repay such extortionate bills in such a short space of time, and the lack of transparency throughout the entire process has only exacerbated the problem.
“It is a scandal that Tower Hamlets Homes’ actions have placed large numbers of leaseholders – many of whom are already vulnerable – at risk of severe financial hardship or even losing their homes. I’m particularly concerned for elderly residents like Max Levitas who will be turning 100 this year. Instead of looking forward to celebrating his 100th birthday, the gift from Tower Hamlets Homes is for him to be burdened with a massive bill that is impossible for him to pay. This is no way to treat a great East End hero.
“By launching this campaign I hope to open a dialogue between leaseholders and Tower Hamlets Homes that will ultimately lead Tower Hamlets Homes and the Council to reconsider. I urge any leaseholders affected to join our campaign and make their voice heard over the coming weeks.”
Jim Fitzpatrick MP for Poplar and Limehouse said;
“The laws covering leaseholders are totally inadequate and need revising. In the meantime freeholders, social and private, should act with sensitivity. Bullying or pressuring leaseholders causes great distress. I hope our campaign can help those who need it.