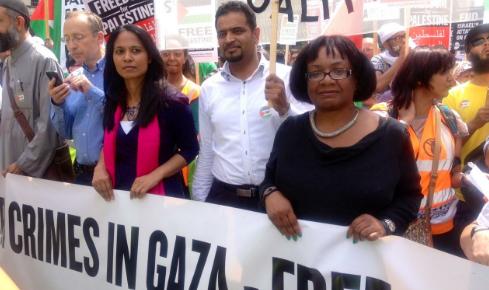 Tens of thousands of demonstrators took the streets on Saturday 19 July in response to the recent escalation of violence between Israel and Gaza. More than 700 Palestinians, mostly civilians, have been killed and 30 Israelis killed since Israel began Operation Protective Edge. Over 100,000 people have been displaced in Gaza. Last Sunday, the deadliest day of the conflict, cost the lives of more than 100 Palestinians and 13 Israeli soldiers.
Further to addressing the demonstration, Rushanara said:
“In the past few days, Israel’s bombardment, and a ground offensive in the Gaza strip has intensified, along repeated rocket fire from Gaza into Israel. The death toll has dangerously escalated with innocent civilians and many children being killed in this conflict.  My thoughts and prayers are with the families and friends of those who have lost loved ones. Above all, these are perilous acts that only make the prospect of peace between Palestinians and Israelis ever increasingly difficult.
The solidarity of those who gathered to demonstrate sends a clear and strong message to both the Israeli government and Hamas for an immediate end to this conflict. The International community must do considerably more to put an end to this intolerable situation by urging both sides to bring an end to the conflict and agree to an immediate ceasefire”
On Monday 21 July, in the Prime Minister’s statement on Gaza, Rushanara Ali MP urged the Prime Minister to show courage and international leadership in bringing the escalating violence in Gaza to an end. Reminding the Prime Minister of his 2010 comments on Gaza, Rushanara highlighted the significant and rapidly-escalating number of death in the latest escalation of bloodshed in Gaza. She asked the Prime Minister,
“Does the Prime Minister stand by his words in 2010 that “the blockade in Gaza must not remain a prison camp”? Does he believe the killings of 500 people and 83,000 displaced people is proportionate in response to the attacks he has mentioned? And, can I appeal to him to show courage and international leadership to help bring an end to this conflict, to act as an honest broker, and bring an end to this humanitarian catastrophe?”
The UN now estimates that more than 725 Palestinians have been killed, and over 100,000 people in Gaza have been displaced from their homes. 85,000 of these people have sought UN refuge. In total, 30 Israelis have been killed, 27 of whom were soldiers.
In remarks made on his visit to Washington, Labour leader Ed Miliband condemned the latest escalation of violence and called for a ceasefire agreement between both sides:  he said ”I cannot explain, justify or  defend the horrifying deaths of hundreds of Palestinians, including children and innocent civilians.