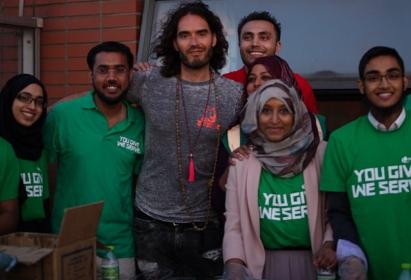 Comedian and activist Russell Brand dropped by for dinner when London-based international charity Muslim Aid served up food for those staying at the Salvation Army at Booth House, Whitechapel on Thursday 2nd July.
The dinner is part of Muslim Aid’s annual Feed the Fasting campaign, during which food is provided for homeless people in the UK, as well those in need of support abroad.  The meal also coincides with the Salvation Army’s 150th Anniversary.
Commenting on the evening, Russell said: “This event is a great example of communities coming together to help each other, and it shows the generosity of the Muslim community and charities like Muslim Aid.”
The Feed the Fasting campaign takes place every Ramadan, which is the month of fasting. During this time, Muslim Aid provides parcels containing a month’s supply of food for people in over 40 countries around the world.  Last year, 227,000 people received parcels containing vital food supplies such as rice, pasta, tins and biscuits.
Abu Akeem, UK Programme Manager at Muslim Aid, comments: “The Feed the Fasting campaign is a great way of supporting people across the world, as well as those right here on our doorstep.  While many of us are fasting, some won’t be able to have a proper meal afterwards, which is why we are here to help.  The dinner at Booth House is also great for bringing people together, as people from all backgrounds, whether fasting or not, can enjoy a meal together.”