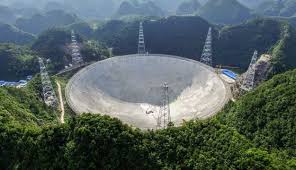 South Africa launched the largest telescopic radio in the southern hemisphere on Friday, a precursor to a larger project set to solve some of the most complex questions facing astronomy.
Sixty-four dishes in the MEERkat array scattered over eight kilometers in South Africa’s Northern Cape Province — where signal interference is minimal — were inaugurated today. Radio telescopes detect radio emissions from both natural sources and man-made. More telescopes are set to be built.
When completed, the Square Kilometre Array (SKA) telescopes will enable astronomers to monitor the sky in unprecedented detail and survey the entire sky much faster than any system currently in existence, according to the project.
David Mabuza, South Africa’s deputy president, officially inaugurated the project. He said it is not only South Africa which will be benefit from the telescopes but scientists across the globe.