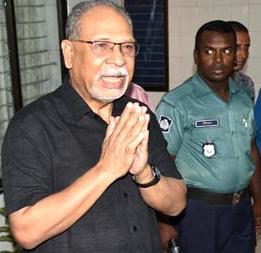 Sacked minister Abdul Latif Siddique was freed on Monday afternoon days after he was granted bail in cases filed against him for hurting religious sentiment of the Muslims.
Senior Jail Super Forman Ali made the disclosure while talking to.
He said Latif Siddque walked out of the prison cell at BSMMU hospital around 4:45pm after his bail order reached the law enforcers from the Dhaka Central Jail.
He left the hospital in a private car, the officer added.
The former minister secured bail in 17 cases in two phases – in 10 cases on June 23 and in seven cases on May 26 – from the High Court.
Abdul Latif Siddique was expelled from the cabinet and his own party Awami League for his derogatory comments against hajj, Prime Minister Sheikh Hasina`s son Sajeeb Wazed Joy, Tablighi Jamaat and expatiate Bangladeshis in New York.
At a program organised by Awami League Tangail unit in the USA on September 28, Latif Siddique, who was in New York as part of the PM`s entourage in the 69th United Nations General Assembly, said he was against hajj and Tablighi Jamaat more than he detested the Jamaat-e-Islami.
“Hajj is waste of manpower,” he said. “Those who perform hajj do not have any productivity. They deduct from the economy, spend a lot of money abroad.”
Those in Tablighi Jamaat do not have anything else to do but block roads during a rally, he commented.
A video clip of him talking spread over the internet kicking up a storm, but the remarks about the hajj in particular touched some raw nerves.