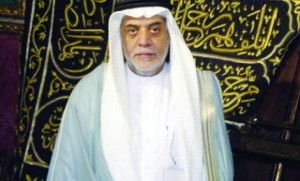 Since Prophet Muhammad (peace be upon him) handed over the key to the Kaaba to Othman bin Talha, the prophet’s companion’s lineage sons have been inheriting it and the title Sadin of the Kaaba until today.
The Sadin is the keeper of the Kaaba’s key.
“Sadins are originally members of the Al-Shaibi family whose history can be traced to pre-Islamic period,” said Sadin Nizar Al-Shaibi.
The family’s history in key keeping goes back to the days of Prophet Ibrahim, peace be upon him, according to Al-Shaibi.
“During the days of Prophet Muhammad, his companion Abdullah bin Abbas, who was responsible for Zamzam water, asked the Prophet to assign Kaaba key-keeping to him,” he said, “but the prophet told him that in Surah An Nisa, Allah ordered us to return the trusts to those to whom they are due (Allâh commands that you should render back the trusts to those to whom they are due), and then he took the key to our grandfather Talha.
Usually the key is with the senior Sadin who is currently Shiekh Abdulqader Al-Shaibi. The key is used twice a year: once in the month of Muharram and the second is in the first day of the month of Sha’ban.
“In the past the Kaaba was opened twice a week on Mondays and Thursdays. Now it is opened only twice a year for washing it and this would be done in an Islamic ceremony and in the presence of a large number of officials and Islamic countries ambassadors and consuls and guests of Custodian of the Two Holy Mosques,” he said. The Kaaba is washed with zamzam and rose waters and oud.
“It’s a massive and great honor of which we are proud, and we ask Allah to enable us perform our duties toward this trust perfectly,” he said.