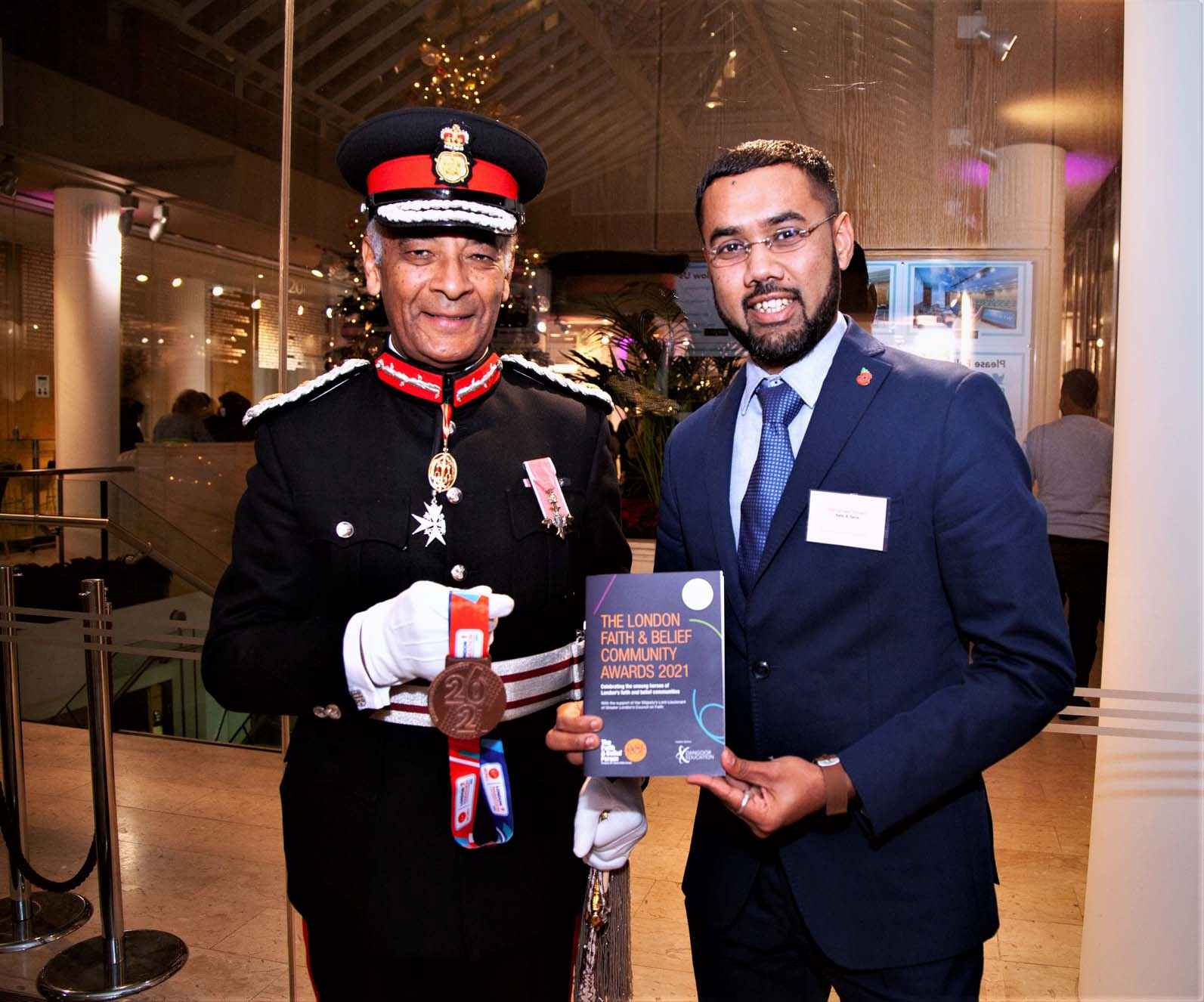 The founder of ‘Safe & Save’, MFA Zaman has been recognised by The London Faith & Belief Forum for his volunteering effort during the pandemic Covid19.
The London Faith & Belief Community Awards recognise Londoners who work to serve their communities and bring people from different backgrounds together on 29th November Monday in The Royal Society of Medicine. This evening was the star of London’s celebration and acknowledges their contribution in the British Society especially during Covid.
The charismatic and lively presentation made by Nims Obunge MBE and F&BF’s Siobhán Anderson which was attended by The Lord Lieutenant of Greater London Sir Ken Olisa OBE, Deputy Chair of Her Majesty’s Lord Lieutenant of Greater London’s Council on Faith Dr David Dangoor CBE, Deputy Lord Lieutenant of Greater London Bushra Naser CBE, The Faith & Belief Forum Director Phil Champain and others renowned guest, dignitaries were present to inspire the talents and their contribution to society.
Sir Kenneth Olisa OBE, is the Lord-Lieutenant of Greater London, describes himself as the “Eyes and ears of Her Majesty” in the capital. In his speech open-ing the ceremony, he highlighted that despite the fears over the impact of Brexit and the pandemic, what the last 2 years have shown is that the nation has the capacity to persist in common values, with religion and belief groups at the forefront. He said, Represents the people who have delivered themselves to others, regardless of whether they are of your faith or not, whether they are your neighbours or not.

Formerly homeless and victim of slavery, Zaman founded a charity ‘Safe & Save’ to assist and support to the homeless, needy people throughout the year. During the Covid lockdown in 2020, ‘Safe & Save’ fed London’s homeless. Also, they always reached out to the elderly people so they would not suffer from loneliness. They have been running a number of projects to help lo-cal people and encourage others to get involved in volunteer work since 2012. During Christmas in 2016, the BBC published a report on their charitable work.
MFA Zaman, the award winner, expressed his gratitude to the Almighty and those who have always inspired him to continue his service. He said, Covid has challenged British society in many ways. Our charities and volunteers played a significant role in overcoming the decade’s most difficult period.
‘Safe & Save’ has been assisting the homeless and the vulnerable people. How-ever, it was extremely difficult to do so while under lockdown.
During the first lockdown, it was pin drop silence. It was a different London with empty stations and parks. There were number of homeless people living on street. We provided food and other necessities. People in lockdown were suffering from mental health issues because they were unable to travel or visit family and friends. Nobody knew when the lockdown would end.
We were in touch with friends and elderly people, particularly through our ‘I am with You’ project. We called and texted them to see if they needed assistance or if they were lonely. However, we require more financial and logi-cal support to continue our service to humanity.
MFA Zaman is one of the front-line volunteers during Covid19 Pandemic. He joined the NHS Nightingale Hospital in 2020. Later he became involved in the NHS vacation project. His service has recognised by the NHS England. He ran in London Marathons, walked from Yorkshire to London and volunteered at the London Olympics, ICC Cricket World Cup among many more roles. He was invited to share his volunteer experience on the BBC One Show.
The 6 categories of Health & Wellbeing, Inspiring Youth, Promoting Inclusion, Supporting Women, Resourcefulness in Response to COVID-19 and Inspiring Individuals all had incredible award winners. Over 98 projects were nominated this year, with 35 projects and 8 individuals awarded, and over 50 projects ‘recognised’. Jessica Hazrati, Faith & Belief Forum awards coordinator for the event, said, We were delighted to host the 5th London Faith & Belief Community Awards. The energy, creatively and passion of London’s amazing faith and belief communities is contagious.
Sir David Dangoor CBE DL, Chair of the Faith Council, closed the event with a speech saying that The Faith & Belief Community Award winners represent the “Wonderful social tapestry that this great city provides” and are the “Backbone of London”.