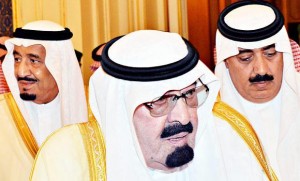 Saudi Arabia passed a sweeping new counterterrorism law on Sunday. The law states that any act that “undermines” the state or society, including calls for regime change in Saudi Arabia, can be tried as an act of terrorism.
It also grants security services broad powers to raid homes and track phone calls and Internet activity.
Human rights activists were alarmed by the law and said it is clearly aimed at keeping the kingdom’s ruling Al Saud family firmly in control amid the demands for reform.
The measure was approved by the Cabinet on Dec. 16 and ratified by King Abdullah.
It was published in its entirety for the first time on Friday in the government’s official gazette Um Al-Qura.
The law also gives the interior minister the power to end sentences and drop charges. It says only the interior minister can order the release of a person on trial.