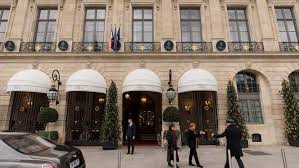 A member of the Saudi royal family has reported the theft of hundreds of thousands of euros’ worth of jewellery from her hotel room at the Ritz hotel in Paris, police sources said Monday.

The person, who was not identified by name, said the theft – which would be the second reported jewel heist at the five-star hotel on Place Vendome this year – took place on Friday afternoon.

The jewels, worth an estimated 800,000 euros ($930,000, Dh3.4 million approx), were not in a safe when they were taken and there was no sign of forced entry, the source said, confirming a report on France Info radio.

France Info said the victim was a Saudi princess staying in one of the hotel’s suites.

An investigation has been opened by France’s anti-organised crime brigade, a legal source said.

In January, an armed gang swiped an estimated four million euros’ worth of jewels from shops inside the Ritz after bursting into the hotel and using hatchets to smash display cases.

All of the loot, some of which the robbers dropped while trying to make their escape, was recovered.