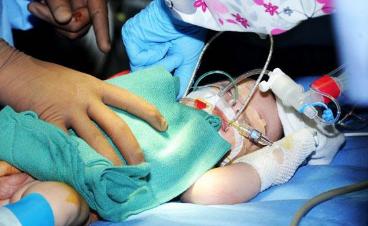 Conjoined Iraqi twins separated by Saudi doctors here are in stable condition, Health Minister Abdullah Al-Rabeeah said Friday.
Al-Rabeeah led a 23-member, multidisciplinary team that separated the babies who were joined from their breastbone to their abdomen, and shared a liver and part of the intestinal tract.
The Siamese twins, Chris and Christian Ramson Corial, were successfully separated during an operation on Thursday. The surgery took six hours, beginning at 8:15 a.m., in seven phases.
Al-Rabeeah, who had the twins placed in separate beds in the intensive care unit of the pediatric ward at King Abdulaziz Medical City in Riyadh, said the procedure was a success. “Their condition is stable,” he said.
“The timely intervention of Custodian of the Two Holy Mosques King Abdullah has helped this Iraqi family have their twins surgically separated,” said Al-Rabeeah.