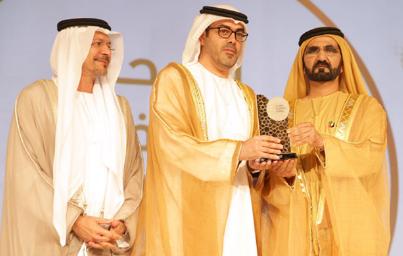 His Highness Shaikh Mohammed bin Rashid Al Maktoum, Vice-President and Prime Minister of the UAE and Ruler of Dubai, honoured the winners of the 2nd Islamic Economy Awards on Wednesday.
The awards were presented to a cross-section of global and local business establishments for their innovative, world-class business initiatives and ideas that are Shariah-compliant and contribute to the social and economic welfare of the Muslim population.
Initiated by the Dubai Islamic Economy Development Centre (DIEDC) and organised by Dubai Chamber of Commerce and Industry and Thomson Reuters, the award closing ceremony was attended by Shaikh Hamdan bin Mohammed bin Rashid Al Maktoum, Crown Prince of Dubai. It was also attended by ministers and heads of government departments.
Dr Zeti Akhtar Aziz, governor, Malaysian Central Bank, received the Life-time Achievement Award. Hajj Saeed bin Ahmed Al Lootah, founder of the world’s first Islamic bank, got a special award for his contribution to the Islamic Economy.
The Money and Finance category award was received by the Islamic Corporation for the Development of the Private Sector from Saudi Arabia; the award in the Food and Health category went to Salma, an entity of Awqaf and Minor Affairs from the UAE; and the Media category award went to The 99, an initiative of Teshkeel Media Group from Kuwait.
Awards in other categories, including hospitality and tourism, were presented to Halal Minds from Indonesia; Waqf and Endowments category award went to National Awqaf Foundation of South Africa; SME Development category to LaunchGood from USA; Islamic Economy Knowledge Infrastructure category to KFH Research from Kuwait; Islamic Arts category to Yusuf Islam, singer, songwriter and author from the UK.
Mohammed Abdulla Al Gergawi, chairman of DIEDC, said: “We, in the UAE, are keen to support innovation and creativity in various sectors. Through the Islamic Economy award, we aim to inspire the business community to provide innovative Islamic services and solutions. In addition, we offer a platform to showcase and recognise the distinguished efforts of companies engaging in the Islamic economy, in line with the vision of His Highness Shaikh Mohammed bin Rashid Al Maktoum in making Dubai the global capital of Islamic economy.”
Al Gergawi added: “The diversity of the award winners validates the competitiveness witnessed in the award categories and reflects the groundbreaking efforts made in different fields of the Islamic economy. We are confident the award will motivate companies to innovate and create ideas for the Islamic economy and adopt best practices to further boost this industry.”
During his welcome address, Hussein Qemzi, member of the DIEDC Board and chairman of Awqaf and Minors Affairs Foundation, said: “The award highlights the wise decision taken by Shaikh Mohammed in 2013 to transform Dubai into the capital of Islamic economy. In one year only, the award attracted 248 submissions compared to 148 in 2013 and from 48 countries compared to 31 in 2013.”
Majid Al Shamsi, first vice chairman, Dubai Chamber, said: “The importance of the Islamic Economy Award has its roots in the integrated Islamic Economy system which cuts across many economic sectors, including infrastructure, tourism, health, food, art and banking services. Interestingly, this comprehensive model is being adopted by many countries in the world in light of the global Islamic Economy’s potential GDP value of more than US$8 trillion, which clearly shows a growing trend in global consumer habits towards Islamic services and products.”
He added: “Dubai has always been on the forefront of promoting and developing the Islamic Economy sector under the directives of His Highness Shaikh Mohammed bin Rashid Al Maktoum, Vice-President and Prime Minister of the UAE and Ruler of Dubai, and his vision of turning Dubai into a global Capital of Islamic Economy. The emirate is investing in the future and is on the right course to realise its vision in the Islamic Economy sector.”
Al Shamsi reiterated the Dubai Chamber’s commitment to supporting the government’s initiative, adding that the organisation of the Islamic Economy Award consolidates Dubai’s position as a global Islamic Economy capital. The Chamber believes that honouring those with creative ideas is the right way to support innovation in the diverse Islamic Economy sector which is witnessing an unprecedented growth in recent times, he said.
The independent jury panel, which was headed by Qemzi, included Khalid Al Aboodi, Andreas Schotter Ph.D., Prof Dr Mohammed Azmi Omar, Tayeb Abdulrahman Al Rais, Dr Fatih Mehmet Gul, Shelina Janmohamed, Dr Tariqullah Khan and Fareed Lutfi.
Nadim Najjar, general manager of Thomson Reuters for the Mena region, said: “We congratulate the winners and wish them all success in their initiatives and activities that drive the growth of the Islamic economy sector — both regionally and internationally. The development of the Islamic economy landscape relies largely on the ethical practices that define the framework of businesses. This makes it imperative to recognise successful initiatives and encourage companies and individuals to endorse best practices across the various Islamic economy sectors.”