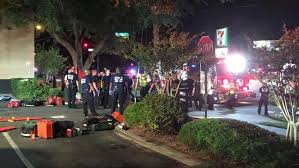 An estimated 20 people were killed at a gay nightclub after a heavily armed gunman seized hostages early Sunday, prompting a police SWAT team to storm the venue, officials said.
“Unfortunately there are people who died from gunshot wounds, maybe around 20, inside the night club,” FBI special agent Ron Harper told a media briefing.
He said around 42 injured were taken to three area hospitals.
“This did turn into a hostage situation,” Orlando police chief John Mina said. “At approximately 0500 hours (0900 GMT) this morning, the decision was made to rescue hostages that were in there.”
It was unclear whether all the victims were killed by the gunman or if some died in the ensuing shootout with police.