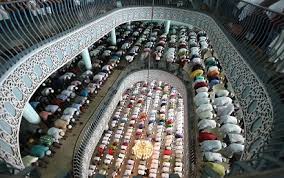 Millions of people assembled in thousands of mosques during the month of Ramadan throughout Bangladesh, where mosques chalked out various Islamic programs and activities to achieve spiritual and eternal peace during the month of Ramadan.
“There are lots of programs in Baitul Mukarram mosque, the national mosque in Bangladesh that is operated by the Islamic Foundation, to achieving Islamic spirit and to create an Islamic environment during the month of Ramadan,” Rafiqul Islam, deputy director of Bangladesh Islamic Foundation, told OnIslam.net.
Bangladesh is home to over 250,000 mosques, including 6,000 in the capital.
These mosques are usually operated by locals, with no government aid or assistance offered to them.
At the start of the holy month of Ramadan, special programs are arranged at different mosques which turn into spiritual and teaching centers.
At Baitul Mukarram mosque, special classes are arranged throughout Ramadan after the Dhuhr and Asr prayers for interpretation and recitation of Qur’an.
“Another special program is Qiyamul Lail [night prayer] which will begin on 20 Ramadan, during which imams will recite the whole Qur’an during prayer within seven days only,” Rafiqul Islam said.
Hafij Maulana Shamsul Haque, chief Imam of Purana Paltan Mosque in Dhaka, noted that his mosque arranges annual Taraweeh prayer on three levels.
“There are three types of salatul Tarabi held in our mosque each night in support of the sociable scope for different kind [of] fasting peoples,” Haque told OnIslam.net.
The first, held at the main floor of the mosque, is for all fasting Muslims, which includes reciting the noble Qur’an during prayer. The second, held at the third floor, is arranged for people wishing to pray with short verses from the noble book.
A special prayer is also held on the sixth floor for people wishing to recite the whole Qur’an within the last 10 days.
Iftar
Along with spiritual programs and special prayers, Bangladesh mosques offer iftar meals to thousands of Muslims throughout Ramadan.
“We have various types of programs in our mosque during Ramadan month for local Muslims,” Abul Kashem, secretary of Masjidul Aqsa at Sabujbag in Dhaka, told OnIslam.net.
“Our three main programs are Salatul Khatme Tarabi [Taraweeh prayer], Iftar meals for who present at the mosque during the iftar period and Qur’an teachings for children.
“We have been serving iftar meals for 70-80 peoples per day at the time of Iftar at this mosque during the month of Ramadan,” Kashem added.
Mufti Harunur Rashid, Imam of Masjid ul Aqsa, announced plans for a daily lecture for worshippers who attend traweeh prayer at the mosque.
The daily theme for discussion is the teachings and aim of Ramadan and to create unity of the Muslim Ummah for the peace of mankind, according to Harunur.
Bangladesh is the world’s third-largest Muslim majority nation with a population of over 170 million.
Ramadan is the holiest month in Islamic calendar.
In Ramadan, adult Muslims, save the sick and those traveling, abstain from food, drink, smoking and sex between dawn and sunset.
Muslims dedicate their time during the holy month to become closer to Allah through prayer, self-restraint and good deeds.
It is customary for Muslims to spend part of the days during Ramadan studying the Noble Qur’an.
Many men perform i`tikaf (spiritual retreat), spending the last 10 days of the month exclusively in the mosque.