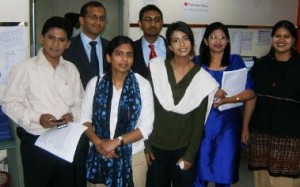 A pair of well-known sisters have been honoured with awards which recognise successful Bangladeshis in the UK.
Former Ealing deputy mayoress Rupa Huq, 41, who was recently announced as Labour’s candidate to be the next MP for Ealing Central and Acton, won the ‘emerging influence’ category in the annual Bangla Power List at the House of Commons on January 28.
Her 38-year-old sister, ex-Blue Peter and Xtra Factor presenter, Konnie Huq, won a prize for her success in the media industry.
The ceremony, held to honour the achievements of British people of Bangladeshi origin, was a cross-party event addressed by Government Minister Baroness Warsi as well as Chief Secretary to the Treasury Danny Alexander.
Rupa, a senior lecturer at Kingston University who has had two books published, said: “I’m delighted to be part of this magnificent event.
“It’s fantastic to be named as an influential force, even though I see myself as a mum and university lecturer who in many ways is the squeezed middle of Ealing.”
The power list nominates 100 bright, ambitious and successful British Bangladeshis across 19 categories.