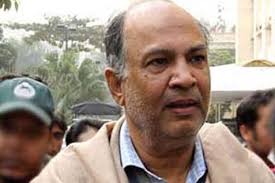 The Appellate Division of the Supreme Court (SC) today upheld the death sentence of BNP leader Salauddin Quader Chowdhury, rejecting his appeal against the verdict of International Crimes Tribunal (ICT)-1.
The four-member Appellate Division panel led by Chief Justice Surendra Kumar Sinha pronounced the short verdict this morning.
The Appellate Division panel started its proceedings at 9 am sharp and passed the short verdict. The apex court acquitted the convict only of charge number seven, for which he was given 20-year imprisonment.
“The tribunal upheld death for Salauddin in all the four charges, for which the tribunal had sentenced him to maximum punishment earlier,” said Attorney General Mahbubey Alam.
“We had expected this verdict and our expectation has been fulfilled,” he added. Prosecutor Tureen Afroz, who took part in the hearing against the gaudy BNP lawmaker before the tribunal, hailed the verdict, saying, “The truth has been established today.”
Ganajagaran Mancha spokesperson Imran H Sarker said, “Through today’s verdict, all the conspiracies and evil politics have come to an end. Truth has prevailed.”
In the meantime, Salauddin’s chief counsel Khandaker Mahbub Hossain said they will file a petition seeking review of the Appellate Division judgement,once the full verdict is released.
After Abdul Quader Mollah, Delwar Hossain Sayedee, Mohammad Kamaruzzaman and Ali Ahsan Mohammad Mujahid, Salauddin is the fifth convict, whose appeals have been disposed of by the Appellate Division.