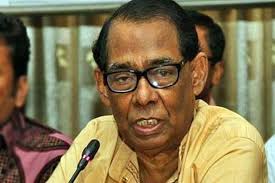 Awami League (AL) Advisory Council Member Suranjit Sengupta, MP, today urged BNP chairperson Begum Khaleda Zia to leave Jamaat-e-Islami.
“Khaleda Zia has to leave her policy of supporting Jamaat. As she tried to legitimize the activities of anti-liberation force Jamaat, on the other hand she also believed in the War of Liberation… but she has to choose one,” he said while speaking as the chief guest at a discussion in the city.
Nouka Samarthak Gosthi organised the discussion titled ‘Ongoing Politics’ with its vice president Chittaranjan Das in the chair. The discussion was also addressed, among others, by Sammobadi Dal leader Harun Chowdhury and president of Nouka Samarthak Gosthi Humaiun Kabir Mizi.
“Although the independence provides all facilities, but it never allows playing role against the independence and provocation against Father of the Nation Bangabandhu Sheikh Mujibur Rahman,” Suranjit said.
He said BNP has to stop celebration of fake birthday of Khaleda Zia by cutting cake and distortion of the country’s history, adding, “They have to accept the spirit of the Liberation War.”
“Even some BNP leaders want to come out of dirty politics and practice liberal democratic politics,” the senior AL leader said.
Suranjit, also chairman of Parliamentary Standing Committee on Law, Justice and Parliamentary Affairs Ministry, said the general election is scheduled to be held after five years under a new election commission following the constitution and the constitution also mentioned about role of the Jatiya Sangsad and Ministers during the election period.
He said the ministers after taking oath do not belong to any political party, because they are working for all citizens of the country after taking charge as ministers.
Referring to BNP’s different speeches by its spokesman, Suranjit said BNP is facing crisis due to change of its position again and again. -BSS