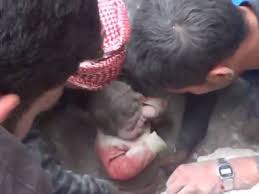 A toddler buried under rubble in Syria has been pulled out alive by rescuers who dug with their bare hands. This video, posted on YouTube, shows a recovery team frantically digging to rescue the trapped youngster in Aleppo. The toddler appears dazed but breathing, blinking slowly and shielding its eyes from the bright sunlight. The footage was dated on Wednesday – the day after government air strikes on the rebel-held district.