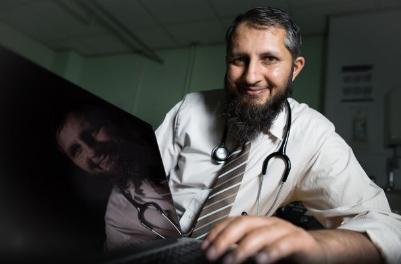 Dr Sirfraz Hussain, based at The Moss Side Family Practice, is using Skype to see some of his patients instead of them having to visit his surgery. Patients are getting easier access to their GP after one began hosting consultations over the internet.
Dr Sirfraz Hussain is using Skype to see some of his patients instead of them having to visit his surgery in Moss Side.
The Moss Side Family Practice, where he is a partner, has a multi-cultural mix of patients, with many already using video calls to contact family and friends overseas.
Dr Hussain, a partner at the Moss Side Family Practice, said: “Our patients have been really receptive to it. They know we are offering video calls as an additional service.
“It is not intended to replace face-to-face appointments, which are the gold standard.
“But for those patients who would find it difficult to come into the surgery it can be a huge comfort.”
Dr Hussain now speaks to around three patients a week via Skype. He also talks patients who have never used Skype and shows them how to use it.
Dr Hussain said: “We can spot things on Skpe which may not be apparent in a conversation alone, and ask a patient to come into the surgery when necessary.
“So many of the cues to a patient’s health are non-verbal.
“So much can be conveyed by body language and behaviour, and these details often paint a fuller picture of how a patient is feeling.
“For example, many older patients will often tell you that they feel fine.
“But when you actually see how they are moving and reacting, it’s often clear that they could be in pain and need some help.”
He added: “For carers who are looking after a dementia patient, or a parent of a child with autism, actually getting into the surgery can be incredibly difficult and sitting in the waiting room can be hard.
“This is where Skype is really valuable. It means that we can keep in touch and see what’s going on in the patient’s normal, day-to-day setting.”
He says he is keen to look at other ways of working that will improve communication between doctors and their patients.
He said: “We have around 100 patients who are aged over 75 and many only come into the surgery once or twice a year.
“We could be proactive in using video calls to keep in touch and spot any potential problems before they happen.
“This would greatly improve patients’ quality of life and it would also reduce the chance of hospital admissions.”