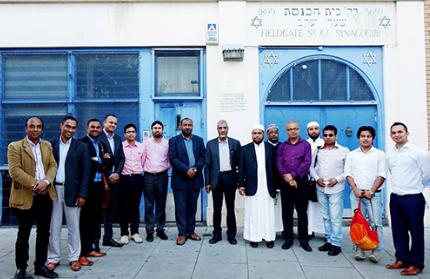 The synagogue building stood between East London Mosque (ELM) and London is now the property of the East London Mosque. Up to now the Jewish people used to pray here, from now on only Muslim people will pray. East London Mosque purchased this Synagogue building on 15th of July with a cost amounting 15 million pounds. Mosque Committee purchased this as soon as they received the offer form Synagogue with the help form members of the community. Mosque Committee expressed their sincerest gratitude to everyone for their benevolent help.
East London Mosque Committee organised a press briefing to give updates to the media and members of the public of this purchase. The committee gave a tour of this two story building to the journalists. There was also a presentation on brief history of East London Mosque and its services to the community.
Secretary of East London Mosque and London Muslim Centre Ayub Khan read the written statement at the press briefing. Chairman of the Mosque Habibur Rahman and Executive Director Delwar Khan provided answers to the questions from journalists.
Muazzin of East London Mosque Hafeez Sayeed Mohammod gave Azan inside the Synagogue before the press briefing.
The written statement read that 1.5 million pounds was raised by Ramadan live TV fundraising, regular incomes form mosque and special Shab-E-Qadar collection. Out of this 1.5 million pound, 1.1 million pounds is Karje Hasana (interest free loan) and rest four hundred thousand pounds are donations. This Karje Hasana of 1.1 million pounds will be needed to pay back and to raise this money, mosque committee will be continuing to raise funds through different appeals.
As part of this, there will Muslim Charity Run Campaign in Victoria Park in East London 9th August.
Hugely successful in past ‘Run for your Mosque’ will be conducted as ‘Muslim Charity Run’ this year.
The press briefing also read the history of East London Mosque. It was told that, today, where the mosque is standing now, once there was only the synagogue. The area adjacent to the synagogue was unused space abandoned by second world war bombings. East London mosque was transferred here in 1975 from Commercial Road and started running its temporary activities. Later the main hall was built. Gradually London Muslim Centre and Mariam Centre were built with the help of the community. Purchasing Synagogue building was the latest addition to its activities.
How purchasing of Synagogue building will benefit the community, answering to this question, the committee leaders said that they have purchased the building within one month of receiving the proposal. Management Board is now exploring the possibilities on how it can best serve the community.
Speaking on Ramadan activities of East London Mosque, Secretary Ayub Khan mentioned that this year East London Mosque witnessed the busiest period of all. Around three hundred people regularly visited the mosque and were benefitted from the services. Around twenty thousand people have had Iftar at the mosque. More than hundred Muslim People performed their Ehtekafh.
He also emphasised that the committee will work in its best capacity for the development of the mosque and always aim to do better than the last year. He also said that with the help of the community, this mosque can achieve a lot in near future.