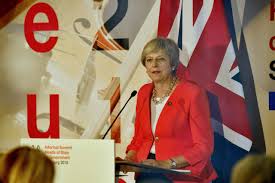 Forcing the UK to leave EU security pacts after Brexit risks the safety of EU and UK citizens, Theresa May has warned European leaders.

The UK says EU negotiators are blocking agreement on tracking terrorists and sharing information after March 2019.

The EU says as a “third country” the UK cannot have the same access to schemes.

The EU’s chief negotiator said they wanted an “ambitious” deal on trade and security but it must be based on “our values and principles”.

Michel Barnier also warned that “huge and serious divergence remains” in Brexit negotiations between the UK and EU and urged the UK to bring forward “workable and realistic proposals” for their future relationship.

“The time is short and I am ready to invite the UK delegation to come back to Brussels next Monday,” he said.

Theresa May addressed fellow leaders at a dinner on Thursday night, during the final European Council meeting before October, when both sides hope they will have reached agreement on the UK’s withdrawal and a blueprint for its future relationship with the EU.

The talks, which stretched into the early hours of Friday, were dominated by the issue of migration, amid a threat from Italy to veto the summit’s entire agenda if it did not get more help.

Mrs May left Brussels on Friday morning and Brexit will be discussed by the remaining EU leaders without her. -BBC