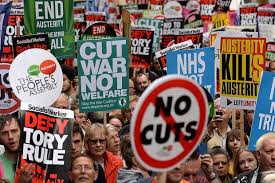 Thousands of protesters marched through central London on Saturday to demonstrate against the newly re-elected Conservative government’s plans for public spending cuts.
Holding banners saying “End Austerity Now” and “Defy Tory Rule”, protesters packed streets outside the Bank of England in the heart of London’s financial district to listen to speeches before marching towards parliament.
“I think there’s a genuine need to stop austerity and cuts to the vulnerable,” waitress Anna Rachel Rowlands told Reuters Video News. “The government seems almost obsessed with cutting benefits for younger people looking for work.”
One marcher carried a placard showing Prime Minister David Cameron peeking out of a garbage can — suggesting this was where his policies belonged too — while another pictured him with devil’s horns.
A small number of protesters let off red-coloured smoke bombs in a mostly good natured march.
Protesters were due to be addressed later by celebrities including comedian Russell Brand and singer Charlotte Church, as well as trade unionists and Jeremy Corbyn, a contender for the vacant leadership of the opposition Labour Party.
Britain’s Conservatives unexpectedly won an outright majority in a national election last month after five years when they had led a coalition focused on cutting public spending to narrow Britain’s large budget deficit.
Since winning the election, finance minister George Osborne has said he wants government departments to make extra cuts this year and to commit future governments to run budget surpluses during normal economic times.
The government also plans to reduce spending on social security benefits by a further 12 billion pounds ($19 billion), arguing that high levels of public debt make Britain vulnerable if there is another global financial crisis.
Speaking to the BBC before the march, Corbyn, a Labour member of parliament and veteran left-winger who is standing for the party’s leadership, said this would worsen inequality.
“We have more people than ever using foodbanks, we have a greater number of people being homeless and many people in housing stress,” he said.
The protest was organised by the People’s Assembly Against Austerity, an umbrella group with support from trade unions, anti-war protesters and some Labour and Green Party politicians.
Neither police nor organisers had an immediate estimate for the number of marchers. More than 80,000 people had said on social media that they would attend.
The last major demonstration in central London was in October, when the Trades Union Congress said up to 90,000 of its supporters marched to call for higher wages.
A 2011 march organised by the TUC as part of pan-European anti-austerity protests attracted several hundred thousand marchers.