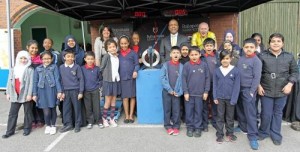 School children welcomed the unique Tour de France Grand Départ trophy to the borough at a celebration of cycling event at Hague Primary School on March 17.
Over 350 children from six schools attended the cycling event at Hague Primary School. Organised by Tower Hamlets Council and hosted by Bikeworks, the event saw the children taking part in the Rollapulluza static bikes time contest, a visit from Dr Bike, a display from Inspire BMX and tricycles, recumbent, and other fun bikes to try out. The schools who took part in the event were Hague Primary, Oaklands Secondary, Thomas Buxton, Stebon Primary, Virginia Primary and Canary Wharf College.
The guest of honour was the Tour de France Grand Départ trophy which is currently touring the British route of the race that is being held in July. The Trophy is a unique and valuable symbol of the Tour de France.
Mayor of Tower Hamlets, Lutfur Rahman, said: “The Tour de France is such an iconic cycle race and we are proud to be part of the British stage. We look forward to welcoming the competitors as they race through Tower Hamlets on July 7. I hope that the children here today have been inspired by the Grand Départ trophy and encouraged to cycle more.”
Cllr Ohid Ahmed, Deputy Mayor of Tower Hamlets, said: “Cycling is a great way to travel around the borough and keep fit at the same time. Our schools’ programme promotes participation in cycling and teaches the safest ways to cycle. Having the Tour de France travel through the borough will be great event and a chance for us all to celebrate cycling.”
Judy Coles, Headteacher of Hague School, said: “We are honoured to have hosted the Grand Départ trophy, and were pleased to have hosted such an educationally and action packed day for other local schools. The children were excited to see the trophy and learn more about the Tour de France. The children were also hugely enthused by the cycling activities; all who took part had a really good time. As a school we will continue to promote cycling and cycling safety to our pupils and families.”
The Tour de France 2014 is starting in Yorkshire on Saturday, July 5 with the section before it gets to France, called Le Grand Départ, for which a special new trophy was awarded for the first time when Corsica hosted it last year. The third stage of the race on Monday, July 7 will start in Cambridge passing through Essex and finishing in London on the Mall. For more information about the Tour de France 2014 please visit http://letour.yorkshire.com/
The council runs cycle confidence, skills and safety sessions to anyone who lives, works or studies in Tower Hamlets. To find out more please visit www.towerhamlets.gov.uk/cycling, or call 020 7364 4001 to book a session. For more information about cycling in schools and school travel plans please contact John Rymell, School Travel Plan Adviser, on 020 7364 6918 or email john.rymell@towerhamlets.gov.uk