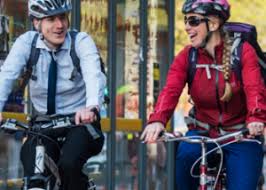 Tower Hamlets Council has become the first London Borough to participate in Bike Life, the UK’s most comprehensive assessment of cycling development. The report, produced by the walking and cycling charity Sustrans, has previously covered seven cities outside London.
Tower Hamlets staff will be working with Sustrans, funded by The Freshfield Foundation, to capture data on how people want to travel, infrastructure, travel habits, public attitudes and the impact of cycling. The project is designed to help UK cities normalise cycling and reports will be published in 2020 and 2022.
Bike Life was founded in 2014 in seven major UK cities but has grown significantly since. Between 2018 and 2022, more cities and regions will participate in the project bringing the total to 14. Collectively they cover almost 14 million people or 20% of the entire UK population.
The approach taken by Bike Life mirrors the Copenhagen Bicycle Account which outlines the development in cycling, identifies challenges and informs planning at a local level. This helps local authorities to build the case for cycling whilst shaping the political and funding landscape for active travel across the UK.
Other councils that have previously taken part have responded to the findings of Bike Life reports with a programme of investment to deliver cycle friendly routes. In Birmingham the council committed to deliver cycle friendly canals and two new segregated cycle routes.
Speaking ahead of the launch, Will Tuckley, Chief Executive of Tower Hamlets Council said:
“We are delighted to be the first London borough to work with Bike Life to build the case for additional cycling strategies and innovative alternatives to car use.
“Reducing air pollution and developing active travel options are key priorities in Tower Hamlets. The data we collate will pave the way for new investment in greener transport solutions across the borough.”
Sustrans London Director, Matt Winfield said:
“It’s fantastic that Tower Hamlets has signed up to the Bike Life programme as the evidence in our reports is a catalyst for funders and decision makers to shape how streets are used. They help bring about the change we really need to combat obesity, congestion and air pollution. Tower Hamlets’ commitment to taking part in the research is a key step in their plan to make the borough a safer, healthier and happier place.
“In 2017, our Bike Life reports revealed strong public support for cycling – with eight out of ten residents backing more investment in dedicated spaces for cycling.”
For more information and previous Bike Life reports visit www.sustrans.org.uk/bikelife